An Important Holiday Message from the Streets

You probably have an image in your mind of what a homeless person looks like. Aimless, scruffy and detached from the realities of the "regular" world. No doubt you’ve walked past one now and then with nary a thought in your mind about their situation outside of maybe feeling a bit of pity.

When you think about it, walking past a homeless person that way isn’t much different than blasting your contacts with marketing messages. When we overlook the "person" and just think of them as numbers, its all too easy to forget they are anything more.

In support of people at all stages of their lives, I'd like to share a story today, about a young man who spent two years homeless on the streets of a small city in western Canada.

A Chapter in His Journey

His friends were drug dealers, prostitutes, and other street kids. He managed to get by on one meal a day at a local drop-in centre (when he could manage to arrive on time).

He had no mental illness. He came from a large, loving family and had lots of friends. You could certainly say he didn’t have his life together, but it wasn’t as if he were suffering from a debilitating condition that forced him onto the streets, either. It just happened to be where he was at that time in his life.

He shared that the winters were hardest. Making it through by hunkering down in an old trailer with a number of other street people on the coldest nights. Everyone was welcome to crash, as long as they didn’t bring any drugs, johns or other trouble with them.

Being incredibly hungry one day, he walked several miles on a chilly fall evening into the suburbs, seeking a backyard garden that wasn’t completely harvested. Peering from the relative safety of dark alleys and into backyards, he spotted one, dropped to the ground and crawled on his belly under a barbed-wire fence and into the planted rows. Pulling one carrot at a time from the ground, he ate quietly, weeping silently between mouthfuls of carrot, roughly sprinkled with chunks of dirt.

Weeks later, seeing his disheveled appearance in a shop window, he was overcome with incredible shame, turned and ran away as fast as he could from the eyes of passersby. The experience jolted some sense into him and he spent the next few days cleaning himself up, even getting a haircut and some clean clothes from the Salvation Army. Eventually, he worked up the nerve to pick up a pay phone and dialled his mother. When she answered, he simply asked, “Can I come home?” I’m fortunate my parents said yes – I felt loved again. Yes, I was that street kid. I probably don’t fit that image now, and I didn’t then either. Not long after that, when I was just 17, my mother passed away, drowning while saving a seven-year-old child who swam out past a sandbar drop-off during a summer birthday party and swim. I have the Gov. Gen.’s Award for Bravery and the Carnegie Medal my mother won in exchange for her life.

These were difficult times in my life, and they weren’t the last ones. As many of you know, 30-odd years later I would battle (and beat) stage IV cancer, weather the economic boom and bust of my adoptive city, and go on to found an award-winning online marketing firm.

Truthfully, I don't know you, but I do know, that you – like every other person on this earth – have had formative experiences in your own life that can’t be represented by a marketing profile or demographics, no matter how well crafted. The unique experiences we go through in our lives mold us into the people we become. They should also teach us that making real connections with one another, and being of assistance where we can, is always more important than studying click-through rates or reducing the people we encounter to just numbers.

For me, always remembering that connections, followers and personas are actually real people with diverse backgrounds, is about the most powerful holiday message I can share, and maybe even the most important piece of “marketing” advice I could ever give.

The next time you connect with someone – online or off – please remember you can never know what their personal journey has been, or what may become in the future. But if you take some time to get to know them, you just might get a wonderful opportunity to learn and help them along their way.

May you make the most of the relationships you develop, online and off.

To help you start to get to know your connections a little bit better - as human beings - my team and I have created this Persona development tool. Feel free to use it any time. 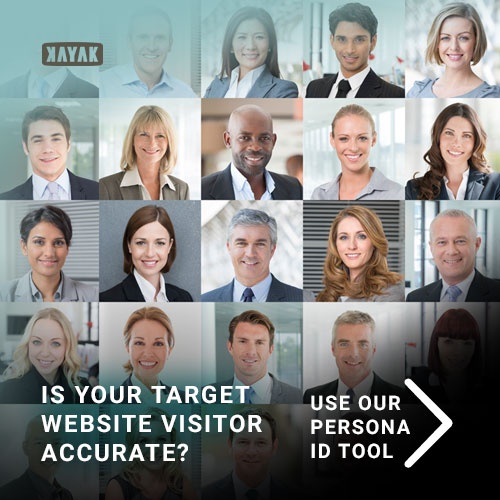